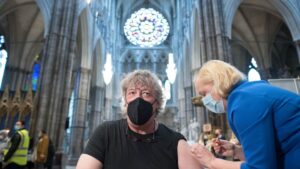 The success of the vaccination programme has helped to restore business confidence to its highest level since 2018, a survey suggests.

More than three fifths, 65 per cent, of firms are confident about growth prospects over three years, according to the Santander Trade Barometer. It said that companies were now advancing plans to expand overseas. A fifth of respondents with no overseas operations said that they were considering making investments abroad, the highest figure since the survey began in 2017.

In the Lloyds Bank UK Recovery Tracker six of the fourteen sectors it monitored reported increased output last month, up from three in January.

Santander questioned 1,000 companies with a turnover of more than £1 million. Respondents said that Brexit was weighing on trade and 35 per cent reported higher trading costs.

A total of 38 per cent said that the Brexit deal would make trading more time consuming and just under a quarter said that the increase in costs and bureaucracy would prevent their business trading in its existing markets.

A total of 31 per cent of respondents said that the US offered the greatest opportunities and 31 per cent cited the EU. Santander said that the election of Joe Biden had helped to assuage fears about protectionism and trade.

The Lloyds survey also showed that the vaccine was boosting confidence. The improving picture in February was driven by technology equipment makers to meet demand for parts in smart devices, motor vehicles, computers and industrial machinery.

Global technology companies are investing in making their supply chains more resilient and innovative, the survey said. As a result it was the only sector to report a rise in export orders. Scott Barton, of Lloyds, said: “The picture should continue to improve as the vaccine rollout progresses.”

Healthcare and food and drink manufacturers were the other sectors to have improved. Among the worst-hit sectors remain automotive, household products, metals and mining and chemicals manufacturers, the Lloyds survey of 1,500 firms showed.