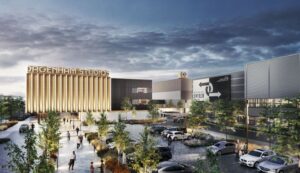 Plans for a major new film studio complex in east London have been given a further boost after the scheme’s Hollywood backer announced it was pumping a further £50m into the project.

Hackman Capital Partners (HCP), which owns studios where classics such as Citizen Kane and Gone With the Wind were filmed, last year took control of construction of Eastbrook Studios, a new film and TV hub set to open in Dagenham.

The company today said it has agreed a 10-year lease with Barking and Dagenham Council for two existing warehouses, which will be converted into further studio space.

The move increases the total number of sound stages from 12 to 18 and takes HCP’s total investment in the project to £350m.

The new 10-acre site, known as The Wharf, will boast 165,000 square feet of sound stages and builds on the larger existing studio complex, which covers more than half a million square feet. It also adds production offices and workshop space.

The studios are expected to open before the main Eastbrook space and will be ready for filming as early as autumn this year.

“This is fantastic news and is another sign of the huge confidence in our borough, London and the UK from HCP, who have already made a massive commitment to building Eastbrook Studios and are now expanding to The Wharf,” said Darren Rodwell, leader of Barking and Dagenham Council.

“Their decision to invest in The Wharf is another boost for our borough and London, meaning more jobs and opportunities for local people.”

The expanded project, which will be the largest studio complex in London, is set to contribute £35m per year to the local economy and create more than 1,800 jobs.

Eastbrook marks the latest in a string of major studio projects in and around the capital as developers rush to meet surging demand for new films and TV shows to fuel the escalating streaming wars.

Last year developers were given the green light to build a £250m film complex in Kent providing studio space for streaming giants Netflix and Amazon.

Meanwhile plans have been outlined for the UK’s largest purpose-built studio complex near Reading, while Sky is set to open a new 32-acre production hub in Elstree.

Los Angeles-based HCP, which was founded in 1986, owns a string of major US film studios, including The Culver Studios, Television City Studios and Silvercup Studios.

Its sound stages have played host to numerous blockbusters over the years, as well as CBS TV hits including The Late Late Show with James Corden.