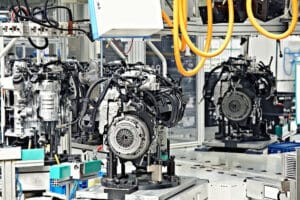 Carmakers in the UK have suffered their worst year since the country was in recession under Margaret Thatcher’s government.

Assembly lines produced just 920,928 vehicles last year and at least 10,000 jobs were lost. Production fell 29 per cent year-on-year, the first time car production has fallen below 1 million since the ravages of the global financial crisis in 2009 and the lowest level of output since 1984.

The decline equates to £10 billion of lost production, according to the Society of Motor Manufacturers and Traders, the trade body which collated the data.

The industry was hit by lockdowns and social distancing in factories, a fall in global demand for vehicles amid the Covid-19 crisis, and a decline in investment from the foreign owners of Britain’s car plants.

With Honda closing its Swindon factory this year and question marks over the future of the Vauxhall plant at Ellesmere Port in Cheshire and Jaguar’s Castle Bromwich factory in Birmingham, the industry is tentatively forecasting a return to only 1 million cars produced this year.

That compares with the 17-year high of 1.7 million reached in 2016, when the future of investment in the UK motor industry was thrown into uncertainty by the referendum vote to leave the European Union. Production levels have shown a significant decline since then. A 29 per cent fall in 2020 at Nissan to 245,649 compares with the 507,000 vehicles its Sunderland plant produced in 2016.

Of the total produced in 2020, more than 41,000, or 4 per cent, were zero emission cars, primarily the Nissan Leaf and the Mini Electric built at Cowley in Oxford.

Mike Hawes, chief executive of the SMMT, said: “These figures, the worst in a generation, reflect the devastating impact of the pandemic on UK automotive production, with Covid lockdowns depressing demand, shuttering plants and threatening lives and livelihoods.

“The industry faces 2021 with more optimism, however, with a vaccine being rolled out and clarity on how we trade with Europe, which remains by far our biggest market.”