Paradise Killer‘s high-fructose world of garish GeoCities colours, arcane jargon and weird concepts is, at first, forcefully bewildering. This surreal private island, inhabited by a bickering community of peculiar elites, where you assume the role of local detective, has the wispy feel of a half-remembered fever dream. The mission that lurks at the game’s core, however, provides a steadying familiarity: multiple homicides, a rather-too-obvious suspect, and a mandate to gather the facts and arrange them into a truth that can withstand examination. While you’re free to make your accusation at any point, the accused will face the death sentence. The moral onus, then, urges thorough, impartial investigative work – something that might prove difficult if you choose to start sleeping with your suspects.

“Crime cannot hide,” asserts one of Paradise Killer‘s fabulously eccentric characters. “Crime wants to be found. The nature of crime is perverse.” The clues, in other words, are there to be found, and much of your time is spent either snuffling around the island’s crannies in search of evidence, or interviewing its inhabitants for titbits of information, perhaps searching through their phone records. Unlike, say, the Phoenix Wright series of detective video games, which lead you, Agatha Christie-style, down an ingeniously laid narrative, Paradise Killer is completely freeform: you go where you want and speak to whomever you want, whenever you want. Serendipity, then, can lead you down cul-de-sacs, and the order in which you happen to discover facts will inevitably prejudice your conclusions. 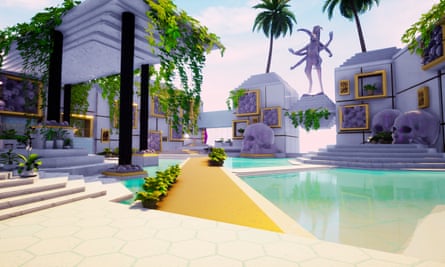 Our minds are predisposed to arrange facts into stories; once we understand something we have in some way tamed it. This wrinkle in human psychology has led to thousands of wrongful arrests by overstretched or under-equipped detectives, as well as wrongful verdicts by juries, who are as susceptible to easy narratives as the readers of airport thrillers. Paradise Killer forces us to reckon with ideas of our fallibility, as we pursue the wrong paths and leap to reckless conclusions. Long after you’ve made your case you’ll wonder if, just maybe, you missed a crucial piece of evidence, and whether that oversight led to some profound miscarriage of justice.

There’s nothing so gauche or straightforward as a Miss Marple denouement reveal, where you discover whether or not your conclusions were correct. In Paradise Killer the truth is more complicated and, counterintuitively, all the more satisfying for it.