I knew I was going to love Spelunky 2 when I met the turkey. The turkey is a noble steed in Derek Yu’s latest cave-delving “roguelike”, in which each run presents a unique set of levels, progress is lost when you die, and the bird must be tamed before offering its services. This involves leaping into the saddle and letting it careen wildly around, hopefully not tipping you on to a bed of spikes or into the fangs of a mantrap. Once settled, you and your festive friend can flap around the level, headbutting spiders and using its decaying flight trajectory to lower yourself past traps and hungry mouths towards the exit.

But the turkey is also subject to the merciless logic of the Spelunky universe. Laid on a ritual altar, it will be sacrificed to appease the gods. Propelled upward by an unplanned explosion, it may meet a pointy end when it returns to earth. Set aflame, well, it will become a roast turkey, and you may consume it for an extra health point as you sob quietly.

That’s not all you can do with the turkey, though, and the fowl’s versatility is a clue to Spelunky 2’s brilliance. Its best secrets are fortuitous or surprising interactions between enemies, traps, items and players: for instance, if you can ride the turkey, then why shouldn’t your enemies? The first Spelunky had oodles of secrets, such as entire sets of hidden levels that many players never saw. Judging by the empty pages left in my in-game journal, Spelunky 2 has plenty of these as well.

Sometimes the most precious discoveries are useful things you can fold into your runs. In the fire-and-brimstone Volcana levels, you often encounter two stone platforms, hovering above a pool of lava. Stand on them and they drop into the fire. They are tricky to jump between, especially when there are enemies nearby. But I realised that if I cling to the edge of one platform, I can jump straight to the edge of the next one in an easily repeatable leap. What was once a hazardous pitfall is now a solved problem. That trick helps me navigate Volcana, which in turn helps me reach later levels with more health, bombs and climbing ropes to spare.

Spelunky 2 also lets you choose your path after a few levels. The choice is usually between remixed versions of old environments, and new locations. The older stuff is harder, densely packed with challenging arrangements of traps and enemies, while the new settings are gentler, albeit still thumpingly difficult. It’s a harder game overall than Spelunky was, I’d say, perhaps to push players towards the new online co-op multiplayer, which is delightful and entropic. 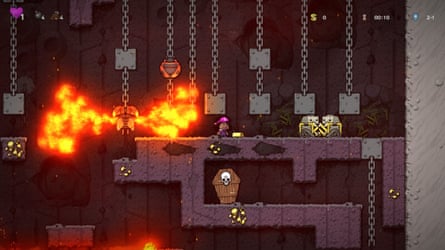 Spelunky 2 has lots in common with its predecessor, but it’s elevated by loads of new stuff. New gadgets! Sub-levels full of treasure and shortcuts! Liquids that flow properly if you create a hole in the ground beneath them! Every new thing is useful, perilous, versatile. Exploring these possibilities is the new game. The bits that didn’t need fixing are left untouched. It’s also beautiful, so much more rich and vibrant than before. It’s already replaced the original Spelunky in my mind’s eye.

Perhaps it’s a little safe in the way it goes about things, anxious not to lose that Spelunky magic by disrupting the familiar flow. But that spell hasn’t worn off after 10 years. With its dastardly remixes of existing themes and a bunch of brilliant new additions, this will certainly replace Spelunky HD as the definitive cave-diving Derek Yu roguelike. I wouldn’t change a thing – though some of my former turkey friends may have different feedback.